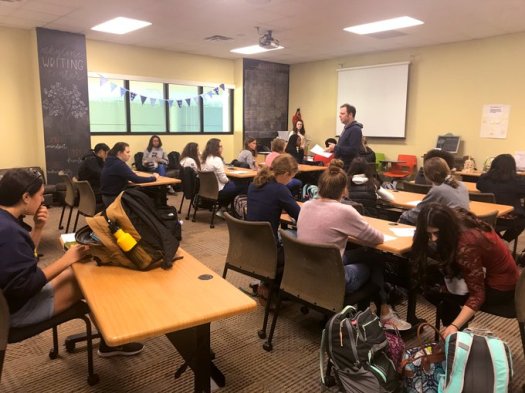 Recently, I listened to an edu-celebrity talk, at length, about “speaking our students’ language,” where I thought we might try to dig into centering non-canonical texts, valuing multiple literacies, and multiplying funds of knowledge in our classrooms. This was a chance, on an influencer level, to have a conversation with a full room of mostly white educators about how notions of “language” work in schools and what that means for students who aren’t in the dominant culture identities. However, the next slide featured a clip of “Old Town Road,” which was used as an example of “speaking our students’ language” and building relevant school environments for students, and a slide after that featured the edu-celebrity doing the Whip and Nae-Nae. While the inclusion of music, films, books, and other forms of media into lessons can be beneficial, the mere presence of Lil Nas X or Silentó or any another artist doesn’t make a classroom relevant or responsive to student, especially if the same oppressive pedagogies and practices that are responsible for the continuation of systemic inequity remain underneath the surface. In other words, these surface-level attempts at inclusion send a dangerous message to rooms of white educators: put on a rap song and dance your way to a more culturally relevant classroom without acknowledging the historical context and current reality of racism and other kinds of bias. Building more equitable environments requires consistent, ongoing work and effort to confront bias and unlearn inequitable practices that marginalize our students. Unfortunately, in the edu-celebrity’s speech there wasn’t any mention of the continued reflection and learning that white educators, myself included, need to do to understand how and what our identities mean in our classrooms and schools.  (By the way, if you’re interested in reading more on the way edu-influencers topics around equity, Benjamin Doxtdator has written extensively about it.)

This speech had me reflecting on coaching sessions I’ve been doing with teachers this year around building inclusive classrooms, a huge part of which is honest, open, and uncomfortable self-reflection. Two of the teachers I’ve worked with this year admitted to struggling with building a connective community in racially and culturally diverse classrooms because they don’t share the students’ experiences and because the students don’t share the experiences of one another. There was a way in which these practitioners want solutions with quick implementation and fast results, but there is no efficient way—whether its “Old Town Road” or the Whip and Nae Nae—to create connected classroom cultures. Chrysanthius Lathan writes: “Many white teachers are discouraged, believing that they are ill-equipped to meet the needs of students color simply because they don’t have the same experiences as them.” This discouragement often leads to what Lathan calls “avoidance,” or it leads to looking for surface solutions to engrained, systemic issues. It’s worth white teachers thinking critically about how to make our classrooms humanizing spaces for students of color, and I’ve been working with colleagues in large and small ways to try to do the hard work of dismantling exclusive spaces and building more inclusive ones in their place.

Don’t Avoid Talking About Race and Justice. Lathan’s idea of “avoidance” resonates because I know that many White teachers, including me, have at times struggled to have honest conversations about race and justice because of insecurity, fragility, and lack of education on critical issues related to race. Our students want to talk about identities and how and what their mean, and we need to be able to provide them with the space and support to have courageous conversations, which means rededicating ourselves to raising our level of consciousness through formal professional development and training, continued informal education, including seeking out our own resources to raise our level of consciousness, and a commitment to anti-racist, anti-bias education. Learning to lean into conversations about race and justice is truly learning to speak our students’ language. In the case of the edu-celebrity’s talk, they avoided talking about race save for in coded ways that made the conversation safe and sanitized for the audience; there was no direct discussion of the threats faced by people of color in this country each day.

As a coach, I’ve read Elena Aguilar’s thinking that encourages us to pursue justice for kids in our transformative work with teachers.  Perseverance is required in shifting these deep-seated mindsets that have impacted every element of teacher practice.  In this spirit, I frequently recommend the Teaching Tolerance Social Justice Standards as a framework to use to reshape and reorient their classrooms; it sets out important ends that both teachers and students can use to work toward democratic, equitable, and socially just classroom spaces. The ideas of a “common language” and an “organizational structure,” phrases used in the introduction to the standards, help anchor teachers and their practices to the anti-racist, anti-bias work required to build the equitable schools and classrooms that we want. Having a robust conception of what anti-racism and anti-bias look like in practice make practitioners more likely to act. Many teachers don’t know that the Teaching Tolerance Standards exist, and more education around them is necessary in schools.

Build Healing Classrooms: Even with an emphasis on social-emotional learning, the teambuilding and connection-making work that are hallmarks of the first week or two of classes go by the wayside when “content” becomes the star of the show, which makes the connections hollow and sustaining relationships difficult. Moreover, social-emotional learning that doesn’t have anti-bias work at its center is, at best, incomplete. Antero Garcia and Elizabeth Dutro encourage teachers to consistently reflect on their positionality within the classroom relative to students and how students are positioned to each other based on the physical and social constructions of the learning environment and our society. Garcia and Dutro talk about ensuring that we are “critical witnesses” to students and that students are “critical witnesses” to each other, which means listening “deeply and compassionately.” This message is in direct opposition to the influencer’s key themes: there is individualistic competition for high-paying jobs, so we better start preparing you for the competition now regardless of toxic and oppressive that might be.

Elements of restorative practices aren’t just for readmitting students; they can be used proactively to create healing environments that both acknowledge and work against oppressive systems that make students feel like they don’t belong. I’ve been encouraging teachers to use mini-conferences throughout the trimester to check in with each student so that no feels invisible or unheard. This requires teachers to attentively and actively listen without defensiveness, pretense, or trying to think of a response, even when they might not like what they’re hearing. I’ve also encouraged the use of circles at regular intervals where students can listen to the stories and experiences of their classmates, which are often visceral and always so important. Healing classroom communities have connection at their center, and restorative practices focus on individual and communal engagement. While these practices take time and might be mildly disruptive to content, they are central to the continued work of connection that our classrooms require to connect us to our students and our students to us. These are practices that help us and our students bear “critical witness” to each others’ experiences.

Center Stories, Not Stuff: Gloria Ladson-Billings and William Tate have both written extensively about the ways that centering stories can have profound impacts on how they see the world. Building the trusting space necessary to have students feel comfortable and safe enough to share vulnerability is incredibly intentional and difficult, which requires a rethinking of how classrooms are organized. In strange ways, the edu-celebrity presentation I watched was doused in capitalistic undertones about making students competitive in a cutthroat world, which certainly speaks to students have come to view school as a space to fight for limited resources. For someone who claimed to be so against deficit orientations, the influencer spent a ton of time on scarcity. Shifting away from “stuff,” like capitalistic notions of success, rank ordering students, and amplifying notions of “rugged individualism,” can have positive impacts on all students because it shifts away from notions of school as a communal space where students work together to have important conversations, share important stories, and empower each other is anathema to “stuff.” Building this communal space that undoes some of the more competitive and exclusionary elements of school requires teachers to reorient their pedagogies, reimagine their time, and respect the voices and values of those who don’t share their experiences, but, if they can do so, they may find themselves revisiting their beliefs along with their students.

One of the strategies I’ve been advocating with teachers is having communal writing days where students can write about important, compelling issues—issues confronting them and our society—without any sort of grading mechanism. Students can choose an issue, find mentor texts that can help the group along, and then share their stories with one another in an open forum. As Linda Christensen argues that we need to be “developing curriculum that builds students’ intellectual capacity to engage in national dialogues,” which gives credence to creating an authethnographic classroom.

The subtext of the influencer’s keynote was that our schools and classrooms are meritocracies, and putting students on the same “playing field” is about teaching students to code or making sure that Lil Nas X is blasting when they walk in. For me, anyway, I think this message misses the mark. Again, there’s nothing inherently wrong with teaching students to code, and there’s nothing inherently wrong with playing music when they come into class, but, on their own, these things aren’t going to fundamentally change the bedrock inequitable practices systemically built into classrooms and schools. It is the inequitable practices that lead to disproportionate outcomes. We can’t avoid talking about these issues and this work, especially when we have captive audiences of folks who need to hear it.

This blog is designed to look critically at education, particularly literacy education, through the lenses of philosophy and critical theory in an effort to see where we’re headed in the right direction and where we might need improvement.