“Pushed around and kicked around, always a lonely boy,
You were the one that they’d talk about around town as they put you down”
–Bronski Beat, “Smalltown Boy”

Nine days ago, Matthew Shepard was interred in the National Cathedral as the Trump administration threatened to erase transgender people from legal existence (at least to start), a resounding and chilling act of state violence. Seven states have laws preventing an LGBTQ-inclusive curriculum in schools, which is a direct statement about whose identities—whose lives–matter. In the New Yorker, Masha Gessen wrote about the sustained effort necessary to make the ordinary violence of our society seem extraordinary:

So, maybe it’s not so crazy that I feel that there is something extraordinary in the internment of Matthew Shepard’s ashes in the National Cathedral. As much as I’d like to believe otherwise, it’s not a sign of the times.

Indeed, the dominant narrative—“look at how far we’ve come”—seems to be more aspirational than an actual statement of fact.

Recent reports from GLESN show the continued inability (and sometimes unwillingness) of schools to adequately meet the safety, curricular, and learning needs of LGBTQ students. Indeed, progress toward safer schools has slowed, as students reporting incidents of verbal harassment from classmates and school staff has increased while positive representations of LGBTQ folks in school curriculums have decreased. When marginalized students are unable to see themselves in the curriculum, they begin to feel insecure and unsafe in our school and classrooms, which leads to achievement and opportunity gaps, truancy, and increased rates of bullying and school violence for LGBTQ students. While the merits of being a “data-informed” educator are clear and routinely preached as virtuous by our field’s thought leaders, I’ve heard endless excuses from colleagues for ignoring the blatant inequities for LGBTQ students in our schools—“the standards don’t allow me to add anything” (LGBTQ folks have provided contributions in every conceivable subject area, allowing you to be inclusive) or “we don’t have the resources” (use online resources to supplement those provided by your district) or “it doesn’t fit into our larger equity work” (we can and must serve our multiple equity needs simultaneously)—and these are immoral derelictions of our duties as public educators to teach everyone in our classrooms. The large-scale unwillingness to make LGBTQ folks and their histories visible in every classroom is erasure—an act of ordinary violence—that’s far too common to be considered extraordinary. 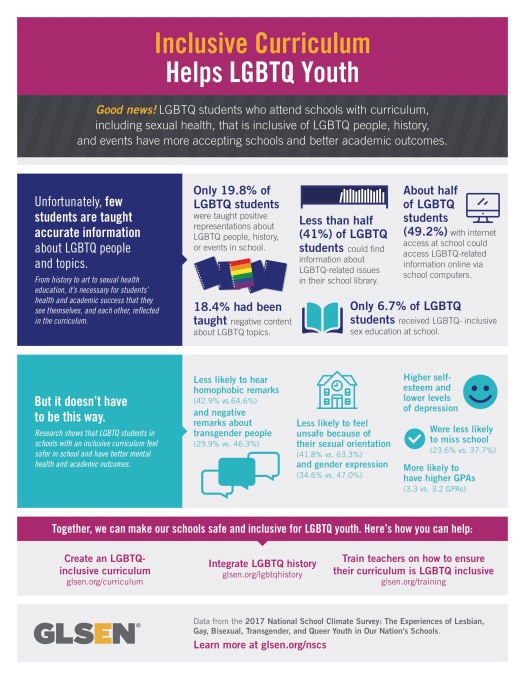 In my Humanities course, we spend sustained time on learning about LGBTQ people and their histories, and, each year, there is pushback from even the most progressive students, parents, and colleagues who are disquieted and discomforted with the representations of queer and trans people in the course. Underlying the comments and criticisms in a hushed disgust, as if what’s been displayed in somehow vulgar or illicit, which couldn’t be further from the truth. Indeed, we spend time studying the origins of queer theory using some of Meg-John Barker and Julia Scheele’s Queer: A Graphic History and thinking about how language can be changed to move away from binary oppositions before watching Paris is Burning and exploring the intersections of race, gender, class, and social geography. In a survey of my classes, only three students said they encountered any direct discussions about LGBTQ people or their identities prior to Humanities, and none of those representations were of queer or trans people of color. When the curriculum has been centered on you—valuing you, seeing you, and honoring your funds of knowledge—it can be a difficult, decentering experience to not see yourself at the center and have to confront certain parts of your own social identity, which I believe accounts for a great deal of the pushback. It might be hard to understand why you would care about those who are on the margins when you’re at the center, especially if you’re not regularly asked to do so. Unfortunately, I’m not alone in experiencing pushback and discomfort: in a Harris poll conducted earlier this year, 37 percent of people said they would feel uncomfortable knowing that their child received curriculum about LGBTQ histories and identities, and those are only those who admitted that they would be uncomfortable to a pollster. While many might argue that the Humanities curriculum is too much too soon, I’d argue that we don’t have time to waste, especially given the dearth of LGBTQ-inclusive instruction prior to Humanities. While the sins of omission on course syllabi and reading lists aren’t new and efforts to disrupt some canonical power is ongoing, it seems like there’s a kind of measured reticence to upending the straight, cisgender canon.

Many students, however, embrace the challenge of confronting their own identities, understanding the political implications and power of their gaze, and working to develop oppositional ways of looking at media that work against the dominant culture’s ways of seeing. Students are asked to take a scene or a stillshot from Jennie Livingston’s Paris is Burning in order to analyze it using our class texts and their lived experience as a basis for unpacking it, and the results were tremendous. Students could do written work, or they could produce videos. In both cases, students needed to make imaginative connections between theory and practice, History and history, and themselves and someone potentially unlike them that they’ve never met, something David Levi Strauss calls an “epiphany of the other.” For all of the disquiet and discomfort, these students were able to interrogate their positionality, challenge their subjectivity, and exhibit the highest imaginable level of social-emotional intelligence and critical thought. This felt disruptive to ordinary violence; their work was extraordinary and transformative.

Those who spoke at the interment of Matthew Shepard’s ashes frequently spoke about the way violence is normalized in LGBTQ communities; it’s part of the identity. Existing outside the dominant culture means preparing to be targeted by those who see your very existence as a mortal threat to their social order and its attendant power. Matthew Shepard’s dad spoke at the interment, saying: ““It is so important we now have a home for Matt…a home that is safe from haters.” Imagine if we could make school a place where our LGBTQ students—yes, our students—could see themselves, know themselves, and have their classmates know them beyond negative stereotypes, representations, and half-hearted inclusions into the curriculum. Imagine if every teacher in every subject found ways to represent the rich, diverse histories and identities of LGBTQ folks in their curriculum. Imagine if a school could be a home that’s safe from the haters.

That would be extraordinary.

This blog is designed to look critically at education, particularly literacy education, through the lenses of philosophy and critical theory in an effort to see where we’re headed in the right direction and where we might need improvement.